Dog vomiting food, water, or even worms is one of the most common reasons why pets are presented to veterinarians. Vomiting is not a disease and can be caused by something as innocuous as eating a bug but could signify life-threatening illnesses especially if it is excessive or stays on for a number of days. So, what causes vomiting in dogs and what can you do stop it?

My doing is vomiting food and water, what should I do?

Well, vomiting – the forceful expulsion of the stomach’s content through the mouth, and in some instances, through the nose – helps a dog to empty its stomach and get rid of indigestible or toxic contents.

Vomiting symptoms vary depending on the underlying condition. Some dogs salivate in addition to vomiting while others don’t.

Vomiting is often accompanied by appetite and weight loss and is common to see people complaining that their dog won’t eat.

In some cases, vomiting is self-induced whereby the dog eats grass when it feels nauseated, or wants to stop gastric irritation. You may see the dog eat grass but if not, you may be able to tell from vomit that contains food and grass.

“Why is my dog vomiting water, food, mucus, etc?” This is a rather common question. Here is a breakdown of some of the common underlying factors for throwing up in dogs:

Dietary issues are a common factor for food vomiting in dogs. These range from food intolerance and dietary changes to ingestion of unwanted materials such as garbage.

A case of food vomiting due to dietary change typically happens when you switch from one dog food brand to another or feed your dog with a high-fat meal when it is not used to it. Usually, it involves no other symptoms of illness.

Your dog may as well develop a sensitivity or become unable to digest certain types of foods and nutrients. Milk and gluten are two common culprits. Food sensitivity typically involves other symptoms such as diarrhea and gas in addition to vomiting.

Stopping vomiting due to food intolerance and dietary changes is as easy as withholding for 12 hours or so and then switching to a new diet that is free of the offending items or ingredients.

When left unattended, dogs may sometime decide to go on a garbage-eating spree that culminates vomiting as a result of an accumulation of foreign objects e.g. dog toys, bones, chewies, etc. in the stomach or upper intestine.

This result in irritation and inflammation of the gastrointestinal tract, a condition commonly described as “garbage gut”. Dogs can vomit especially large volumes after eating garbage. This is usually accompanied by diarrhea.

A similar effect can occur when your dog ingests any toxic substances. Common culprits include strychnine, ethylene glycol, zinc, and lead. In addition to vomiting, other symptoms of toxin ingestion include loss of appetite, abdominal pain, depression, and dehydration.

The exact symptoms depicted will vary depending on the type of parasite responsible for the condition.

As is the case with humans, pregnant dogs also exhibit a form of “morning sickness” which is often characterized by vomiting among other symptoms such as excessive sleeping habits, abdominal and nipple enlargement, and sudden behavioral changes e.g. suddenly cringing when it used to be very jovial.

Vomiting tends to occur more in the early stages of the pregnancy and the vomit content may either comprise of food or water only (sometimes mucus) or may be a mixture of both. The term “morning sickness” notwithstanding, vomiting and other symptoms of pregnancy in dogs can occur at any time of the day, including at night.

Both bacterial and viral infections can cause vomiting in dogs. Infections typically cause relatively lower volumes of vomit.

For bacterial infections, small intestinal bacterial overgrowth, or SIBO, is a common concern. It is also often referred to as antibiotic-resistant diarrhea.

The side-effect of Certain Medications

Adverse reactions to certain medications can also trigger food and water vomiting in dogs. If you have administered some medications to your dog in the last few days, it is possible that they are to blame for the vomiting.

Among the medications that often trigger vomiting as a side-effect are Digoxin, erythromycin, and chemotherapy medications.

Other Causes of Dog Vomiting

A dog may also vomit food or water as a result of the following causes:

These conditions tend to cause sporadic or irregular vomiting in dogs over a long period of time.

When to Be Concerned About Dog Vomiting food or water

You should check with your veterinarian if:

To check for the hydration status of your dog, lift its upper lip up and then rub your finger across the gum to get a feel of its texture. Gums are typically wet and slimy and if they feel dry or tacky, check with your veterinarian immediately as this is often an indication of dehydration.

Another method is to pull the skin around your dog’s scruff up gently until it forms a “tent” and then release it. It will resume its normal position in 2 seconds or so. If not, your dog is probably dehydrated.

If your dog is vomiting whole food, it may be an indication of regurgitation which is very easily confused with vomiting.

Regurgitation is a spontaneous expulsion of food materials through the mouth or esophagus with no abdominal effort (contractions) involved – which makes it appear effortless. It is usually attributed to gastric issues that occur in the early stages of the digestive process.

Regurgitation commonly occurs when a dog likes a new food that it eats so fast or competes with another dog(s) at mealtime.

In such a scenario, the dog may swallow improperly chewed food alongside air. When enough large chunks of food and air accumulate in the stomach, the dog may involuntarily throw up after eating; what we perceive as regurgitation.

Both regurgitation and vomiting can occur immediately after or hours after eating.

What to do if your dog vomits after eating

If you notice that your dog has a tendency to eat too fast only to end up puking, serve your dog to smaller meals at more frequent intervals until you notice a reduction in your dog’s eating speed. Also, change to wider, flat surfaced dishes as opposed to deep dishes which encourages bigger mouthfuls of food.

As we have seen, there are many causes of a dog vomiting. As a result, the appropriate treatment and home care measure will vary depending upon the underlying condition.

It is recommended that you withhold food from the dog for at least 12 hours and instead provide a couple tablespoons of water every 30 minutes or so. Re-introduce water to the dog after 12 hours and then give small amounts of bland after 12 hours since the last vomiting incident.

Good choice for bland foods includes hamburger and rice, and chicken and rice. A general guideline is 1 part lean meat: 5 parts starch. At the onset, give the pet 2 to 3 tablespoons to see if vomiting occurs. If not, continue giving increasingly higher amounts of bland food every 1-2 hours. If vomiting has stopped completely next day, you may then switch back to normal meals.

If a new meal or food brand is, however, to blame for vomiting, you should consider making changes in the diet accordingly to avoid offensive ingredients, add fiber to make the food more digestible, decrease fat intake etc.

Surgery is often used as a treatment of last resort when other treatment options have failed and for some severe cases of gastrointestinal obstruction.

If a dog drinks too much salt or sea water, it may suffer from a condition known as hypernatremia, salt poisoning or “beach diarrhea” if you like. This occurs when excess salty water in the body offsets electrolytic balance by raising sodium levels in the extracellular fluid.

When that happens, the cells start losing water as the body tries to balance sodium levels. This is very important since sodium ions play an important role in maintaining of blood pressure and muscle function.

Vomiting and diarrhea are the first symptoms of hypernatremia in dogs but as the condition progresses, other serious symptoms such as seizures, depression, brain swelling, and loss of coordination may be observed.

Did you know that salt water is often used to make a dog vomit?

Hypernatremia is a serious condition and urgent veterinary attention is advised.

You can always avoid hypernatremia by offering your dog some fresh drinking water frequently while at the beach.

Your dog may as well fall ill and depict vomiting alongside other symptoms as a result of drinking too much water at the pool, lake, name it.

This is usually the result of a condition known as hyponatremia. Hyponatremia is the exact opposite of hypernatremia which means it is the presence of extremely low levels of sodium in the extracellular fluids.

Falling levels of sodium concentration in extracellular fluids cause absorption of water into the cells as a way for the body to balance its electrolytic balance. This culminates in swelling of the cells in the brain. The condition may also have an impact on the central nervous system.

In addition to vomiting, other symptoms for hyponatremia include diarrhea, lethargy, nausea, loss of coordination, bloating, dilated pupils, lighter-colored gums, glazed eyes, and excessive salivation. Some severe cases may be accompanied by difficulty breathing, loss of consciousness, seizures, and even death.

What about a Dog That Vomits Food or Water after Exercise?

If your dog tends to vomit after exercise, chances are that the dog is over-hydrating either intentionally or unintentionally e.g. when diving to get a toy or ball from the bottom of the pool, leading to hyponatremia.

You can avoid this by cutting down the length of time your dog exercises in the lake, pool, pool, etc. It may also help to avoid excessive playing with water from garden sprinklers at home.

My dog/puppy vomited worms, is it a serious health concern?

Well, worms in dog vomit usually indicative of stomach worm infection. Roundworms are the most likely culprit especially for cases that involve a puppy but tapeworm may also be puked by pets.

Roundworms are typically round and long, so much like a strand of spaghetti but tapeworms have a segmented, flat body.

Fecal flotation examination at your vets’ facility is ideal to establish exactly what types of intestinal worms your dog especially if the dog has continued with the trend of throwing up worms after deworming – which should be a regular pet care routine by the way.

An examination of the vomit could also be carried out to examine it of worm eggs.

Wormers are usually given to pets to get rid of worms. Your vet will prescribe the most appropriate wormer depending on the kind of intestinal worm you are dealing with. You may have to repeat the deworming process one or more times over a period of a few weeks or months.

Because fecal flotation tests for the presence of worm eggs, it may show negative results even after worms have been seen in vomit.

Here are some photos showing dog vomit with worms. Be warned that this may be unnerving if you have not seen it before. 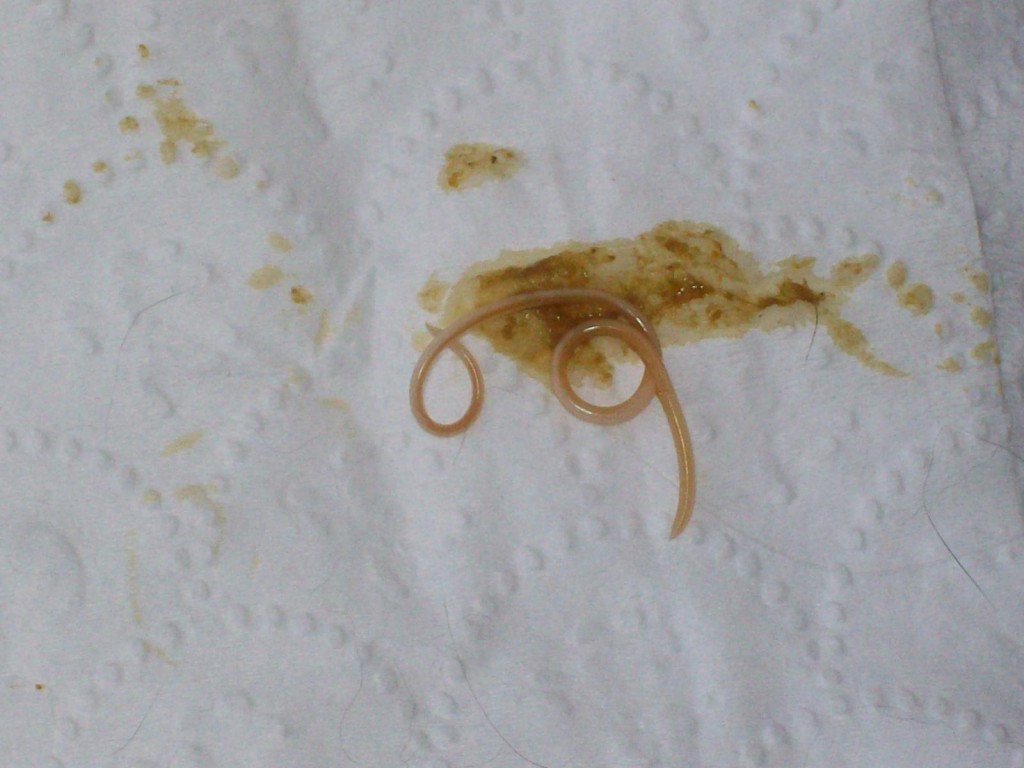