The majority of diseases are caused by bad water conditions. If you take care of your water quality by doing frequent water changes, and house and care for your betta sufficiently, disease will be scarcely a problem. However, disease does happen, and it is good to be prepared in case it does. Having a few medications on hand is a good idea.

Fin rot is probably be the most common disease for Bettas.
Fin Rot is manly caused by dirty water, but it can also be caught if they damage their fins (such as tearing them on a sharp ornament), from here, it is open to bacteria, and fin rot may take hold.
It is contagious, so keep any Betta’s water away from healthy Bettas.
If you happen to have a divided tank that allows Betta’s to share the water, treat all the Betta’s involved.
To tell if your Betta has Fin Rot, his tail will look torn, or with bits missing. The edges may have either a white or black lining.
To treat Fin Rot, any bacterial treatment will work. Adding aquarium salt could help too. IAL (Indian Almond Leaves) are always recommended, as they hold anti-bacterial properties.

TIP: If you use aquarium salt, 100% sea salt is pretty much the same and works just as well. Any salt as long as it does NOT contain Iodine is fine. I use rock salt, but make sure it is dissolved before use. Use at a dosage of 1 tsp per 20L.

Once Fin Rot is treated, fins should grow back, but there is a chance they will not be quite the same as before, depending on how severe the case was. 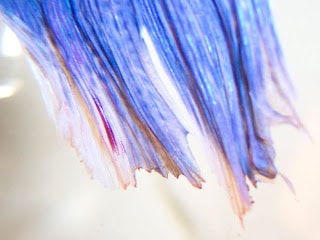 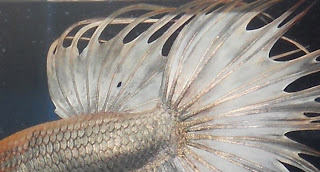 Finmelt is another form of finrot. Rather than the fins rotting, the fins melt, and look like melted plastic. Finmelt is extremely aggressive, and should be hit straight away with heavy medications. Triple sulfur or tetracycline is a good choice. 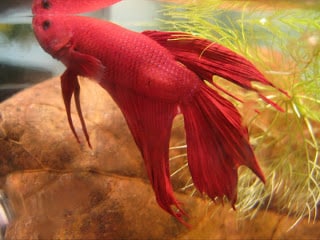 Velvet is a parasite that is very contagious.
It can be hard to spot, but if you shine a torch on your Betta and it looks as if it is covered with a fine gold or rusty dust, then sadly you have Velvet to deal with.
Bettas with Velvet will act quite sick: they will have clamped fins, and will scratch against anything such as gravel, tank walls, or decorations. They may also have a loss of appetite and colour.
To treat Velvet, keep the Betta in the dark (throw a towel over the tank), raise the heat a bit, and medicate with any medication that cures Velvet. Aquarium salt will also help*. IAL is always recommended.
The reason you black out the tank is because velvet requires light for their life cycle. Cut the light, they cannot grow, the medication kills them, and because of lack of light – new parasites cannot start another lifecycle.
Sanitize any nets you use, along with anything your fish has had contact with.

* TIP: If you use aquarium salt, 100% sea salt is pretty much the same and works just as well. Any salt as long as it does NOT contain Iodine is fine. I use rock salt, but make sure it is dissolved before use.

Swim bladder disease is not contagious, and can be caused by many things, usually overfeeding. The Swim Bladder is an organ located near its back. It helps the Betta to swim properly. 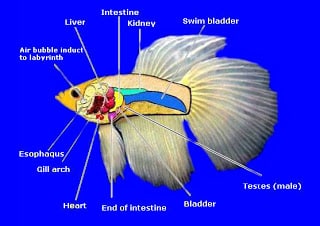 Your Betta may have gotten Swim Bladder Disease if you dropped him/her or handled too roughly. If this is the cause, it can not be cured.
When a Betta has Swim Bladder, he will either float vertically at the top of the water, or lie on the tank bottom. They will have difficultly swimming, and may or may not have a kink in its back to make it ‘S’ shaped.
Double Tail Betta’s are more prone to Swim Bladder as they have a shorter body than singled tailed Bettas.
There isn’t really a treatment, most of the time, it sorts itself out. It’s a good idea to put your Betta in a tank longer than deep, or lower the water level. This helps them to be able to reach the surface.
Fast your betta for 24-48 hrs, and the following day, offer a pea.
Sometimes Bettas will live with SBD for their lives, but don’t worry: they aren’t in pain, just have a little difficulty maneuvering.

Not much is known about Dropsy, and it is probably the most fatal Betta disease. Insufficient water quality, and disease from live food have both been blamed for causing dropsy, although there isn’t proof that they are the sole cause.
Dropsy is when a Bettas kidney fails. Fluid builds up, and causes the scales to be raised like a pine-cone.
Dropsy isn’t contagious, but the bacteria that caused it is. Any Betta with Dropsy should be isolated from all other livestock.
Sadly, they will die within the maximum of 15 days, there is no cure.

Also known as white spot, Ick is a parasite, which is very contagious.
Bettas with ick look as if they have been sprinkled with salt. They may be less active, have a loss of appetite, clamped fins, and could be scratching on anything that could be found.
To cure, raise the temperature of the water to 30ºC (85º F), and add any medication that cures whitespot/ick. It should be gone within a week.
If your Betta is in a small tank, you cannot raise the temperature. Do not put heaters in tanks less than 20L, as it could easily boil your fish! If this is the case, do a full water change, and add your medication and Aquarium Salt*.
The reason you raise the temperature is because the Ick parasite is sensitive to heat, and will detach itself from the fish and swim off in the water; there, the medication will kill it.

* TIP: If you use aquarium salt, 100% sea salt is pretty much the same and works just as well. Any salt as long as it does NOT contain Iodine is fine. I use rock salt, but make sure it is dissolved before use – you don’t want your Betta swallowing it.

Popeye is a bacterial infection, and is caused by poor water conditions. As you can probably tell by its name, the eyes of a fish with pop eye bulge, until they are popping out.
To treat, do a waterchange, add Indian Almond Leaves (IAL) if available, as they contain anti-bacterial properties. You can also add anti-bacterial medication. Melafix may be of use for mild cases. When using Melafix for bettas, use at half the recomended dosage rate.. as Melafix can be harmful. Bettafix is the same as Melafix, just at a dilated dosage.
When cured, the eye will deflate, and sink back into its socket.

Easily the most deadly Betta disease, even though many people haven’t even heard of it. It can imitate may other diseases (such as Popeye) and that makes it hard to find. Often, the Betta has a twisted spine and is really skinny, even if it is being fed normally. It can take up to six months to take affect, and when it does, it attacks internal organs such as livers and kidneys.
This is the only fish disease that is contagious to humans! The good news is, unless you have a very infected tank, and stick your hands right in, while you have a big cut, along with a weak immune system, you won’t catch it (so the chances are slim). Even if you did catch it, you won’t die, just get a nasty skin infection which will take a long time to heal. It is very rare for humans to catch.
Tuberculosis can be linked to contaminated live food, or eating dead fish that had previously had it.
There is no cure.

When a Bettas gills become inflamed, one or both gills will not close properly. They may or may not look red on the inside; and if in the last stages, they would be gasping for air, unable to breathe properly.
A Bettas gills may become inflamed because of bad water conditions, or perhaps from a bacterial infection.
To cure, Isolate any sick Betta with Inflamed Gills, and every third day do a full water change. Every time you change the water, add any sort of bacterial medication you have, I would use either triple sulfur, or tetracycline if available. Get your water tested, if you don’t have a test kit – most LFS (local fish stores) will do it for you.

Bacterial infections are normally a sign of high ammonia in the water. This comes down to not enough waterchanges.
Bacterial infections are very contagious. When a Betta has this disease, they may have clamped fins, they could lay at the bottom of their tank, be inactive, have a loss of appetite, and show colour loss. If left untreated, they will have red patches and open sores all over their body.
To treat, do a full water change. Remove any uneaten food (this should have been done as soon as your Betta had finished eating!) Isolate any Betta who is infected. As for medications, use any bacterial treatment you can find.
Using a cotton bud, you can “paint” on Multi-cure onto the affected sore. Three times a day is ideal, try to do it at least once daily. Do this is a Chinese container and filled just past their body, or in a mesh net (preferred). This worked wonders for the guy pictured below.
Continue treating until your Betta is healthy again.

If you notice your Betta has white cottony patches on its body, and that he may or may not be less active, may have stopped eating, may be paler than usual along with clamped fins; then your Betta has a fungal infection. Fungal infections are contagious, so isolate any Betta to be found with fungus. To treat; do a full water change and add any Fungus medication you can find. Do this treatment every third day, until cured.

External parasites are easy to find, and magnified glass helps to see them better. A Betta who has external parasites will dart and scratch itself on whatever it can. External Parasites are usually brought in from new fish. To cure, do a full water change, and add aquarium salt*. Look for a medication that kills parasites.
Continue treatment every third day until gone.

*TIP: If you use aquarium salt, 100% sea salt is pretty much the same and works just as well. Any salt as long as it does NOT contain Iodine is fine. I use rock salt, but make sure it is dissolved before use – you don’t want your Betta swallowing it.

A picture with a Betta with External Parasites circled in green.

Internal Parasites are a real pest (like all other diseases). They can come through from introducing new fish to the aquarium, or on live food.
The behavior of Betta’s with internal parasites does not usually change, but they appear to get getting thinner even though they eat normally.
To treat, do a full water change, then medicate with a wormer. Using Big L, a pig and poultry wormer, also works well – but at a fraction of the price of a Betta wormer. Use Big L at a dosage of 1mL per 7L of water. Do a water change every three days, and retreat, until gone.