All About The Betta Fish

Betta Splendens – otherwise known as Betta Fish or Siamese Fighting Fish – originated from parts of Cambodia, Indonesia, Malaysia, Vietnam, Thailand and other parts of Asia. They lived in rice paddies just like these:

Map of where Betta’s originated: 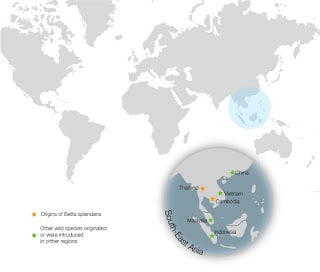 Even though these paddies are shallow, there were thousands of acres for these fish to roam. A single male could have a territory of up to 1m².

Many people believe that since Bettas came from shallow water, they are able to survive in cup sized tanks, or bowls. Although they can survive in small spaces -such as cups and jars – they cannot thrive.
Betta’s waste builds up ammonia which will kill your fish. To get rid of the waterchanges, 100% waterchanges may be needed daily, and if you miss a waterchange, ammonia will build up and kill the fish.
Frequent 100% waterchanges can also stress the fish, which can leave them open to disease, and ultimately death.
Bettas are tropical fish, so their water must be heated for them to thrive. Small spaces in tanks cannot be heated sufficiently, and this will also leave the fish open to disease, and later death.
Bettas that are housed in larger, heated tanks can live up to 5 years, in comparison to the few months in small, unheated tanks.
The reason Betta’s are able live in shallow amounts of water is because they have a special organ called the labyrinth. The labyrinth allows Betta’s to breathe oxygen from the atmosphere of the water surface. The Labyrinth organ is located just above the gills and is made up of tiny folded bones that seem to resemble a maze or labyrinth: hence the name.
Other Labyrinth fish include Gouramis and Paradise Fish.
Bettas must have access to the surface to breathe, if they cannot get to it, they will drown.

If you keep your Betta healthy in the correct conditions, your Betta will be thriving for years!

To learn how to take care of your Betta, please read the BETTA CARE section.