Widely available over the counter as a pink oral suspension (in pink bottles), Pepto Bismol has bismuth subsalicylate as the active ingredient. It was first developed – and is most popular – for treatment of diarrhea in babies. More and more pet owners are however giving this pink medicine to their dogs for the relief of diarrhea, indigestion, and upset stomach. Read on to discover everything you need to know about using Pepto Bismol for dogs.

Is Pepto Bismol Safe For Dogs?

Pepto Bismol has mild anti-inflammatory, antibiotic, and antacid properties which makes it ideal for treatment of diarrhea and indigestion. A general guideline is however emphasized that mediations and drugs formulated for human consumption should never be given to dogs and other pets – unless directed by a veterinarian, of course. This brings about the question, “can I give my dog Pepto Bismol” among cautious pet owners.

According to Drs. Foster and Smith of PetEducation.com, Pepto Bismol is generally safe for dogs but not for cats. Cats tend to be particularly sensitive to the aspirin in Pepto Bismol; in fact, it can be fatal. It is however important that the medication is used properly to avoid adverse effects side. As a matter of fact, it is a good idea to consult with your vet before giving your dog Pepto Bismol as some dogs are not ideal candidates for this OTC medication.

Also according to Jessica Wallach, DVM, a veterinarian based at New York City’s Animal Medical Center, despite being safe for dogs if given at the right dosage, Pepto Bismol should be a temporary (not long-term) solution.

While giving Pepto Bismol for dogs’ diarrhea or any other stomach related problem, it is also important that you avoid giving your dog any medication that is known to thin the blood. Aspirin is one such drug. This is because Pepto Bismol often increases the levels of salicylate in blood serum.

Heightened levels of salicylate in the blood cause it to thin out. It can also cause irritation of the digestive tract. When Pepto Bismol is specifically given along aspirin, salicylate levels of blood could rise so much as to cause salicylate poisoning. This can cause internal bleeding, tremors, seizures, troubled breathing, coma or even death.

Pepto Bismol for Dogs – What does it Specifically Treat?

Now that you know that dogs can indeed have Pepto Bismol, the next question, is what can you use it for?

The most popular use of Pepto Bismol in humans is diarrhea treatment. It is thus not surprising that the question, “can I give my dog Pepto Bismol for diarrhea?” arise pretty often among pet owners.

According to Drs. Foster and Smith, Pepto Bismol are used for treating diarrhea caused by dietary indiscretion as opposed to other factors such as parasitic infection. It helps to soothe the lining of the stomach and intestines which in effect stops diarrhea.

It is critical however to see a vet if diarrhea continues or more than 48 hours as this could be an indication of a more serious underlying cause. You should also watch out for fever, lethargy (your dog becomes less active and alert and appears weak), and signs of abdominal pain. These symptoms warrant the urgent attention of your vet.

Pepto Bismol is safe for relief of stomach upset (indigestion, stomachache, etc.) in most dogs. According to the Canine Journal, dogs eat grass to induce vomiting. This is how they get rid of something they ate that disagreed with their stomach and thus cure stomach upset. Sometimes a change of diet or food brand is to blame for upset stomach in dogs.

At times, however, eating grass can fail to induce vomiting and thus heal the stomach upset (indigestion). The stomach upset can also make the dog not want to eat grass. Such cases can benefit from giving your dog an appropriate dose of Pepto Bismol.

Can I give my dog Pepto Bismol for vomiting? According to Drs. Foster and Smith, you can use Pepto Bismol for dogs’ vomiting if it has a dietary link. This household medicine can in such a case help to soothe the stomach and/or intestinal lining and thus stop the vomiting. Vomiting and diarrhea tend to go hand in hand with dogs.

If using Pepto Bismol or any other bismuth subsalicylate preparation for vomiting doesn’t do the trick 48 hours down the line, get in touch with your vet. Fever, depression, and signs of abdominal pain are also pointers that you need to take your furry companion to the vet.

How Pepto Bismol Works for Dogs’ Diarrhea and Stomach Upset

The use of Pepto Bismol for dogs’ diarrhea and upset stomach (indigestion) hinges upon its ability to soothe the stomach and the intestines and thus relieve the symptoms. This household medicine draws its efficacy in the bismuth and salicylate components of the active ingredient, bismuth subsalicylate.

Bismuth works by coating your dog’s intestines, thus shielding it from the effects of toxins. It also displays a weak antibacterial activity which protects against Heliobacter bacteria. Salicylate, on the other hand, exhibits a slight antiprostaglandin effect which helps in the relief of certain types of diarrhea. The hormone-like substances referred to as prostaglandins promote fluid secretion in the intestines, which then causes diarrhea.

Pepto Bismol is generally safe for dogs. It is, however, important to use it in the right amount to prevent undesirable side-effects. The appropriate dosage of Pepto Bismol for dogs will vary depending on your dog’s weight. Vet info provides a general guideline of 0.5 ml to 1 ml for every pound of dog weight, given an interval of 6-8 hours for 5 days.

For tablets, this is equivalent to a ¼ tablet for every 20 pounds of body weight.

This guideline assumes that you will be using the original Pepto Bismol oral suspension with a concentration of 1.75%, i.e. 17.5 mg of bismuth subsalicylate per ml of the medicine. The brand you use may have a different concentration. If that is the case, your veterinarian will advise accordingly.

You will find the following Pepto Bismol dosage chart useful. 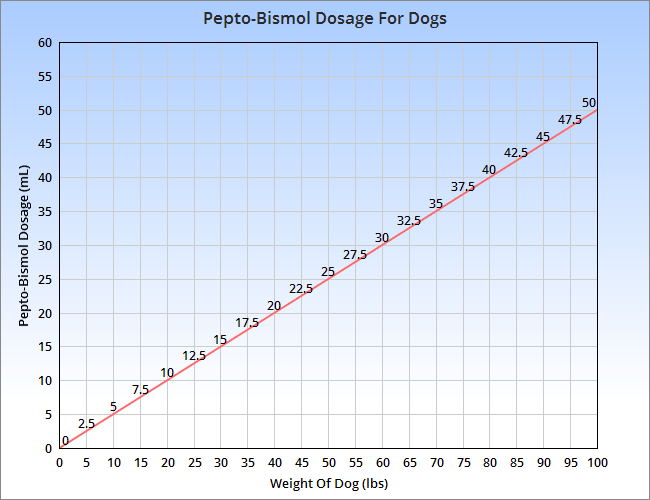 In case of an overdose, take your dog to the vet right away.

The side effects associated with using Pepto Bismol for dog’s stomach problems are comparatively rare. This is especially true if the proper dosage is used. Some side-effects can still be observed in some cases, including:

Other implications associated with using Pepto Bismol to treat tummy problems in canines are:

How to Administer Pepto Bismol to Dogs

To get a dog to take Pepto Bismol, a syringe (without the needle of course) is your best bet. Simply open your dog’s mouth, position the syringe at the rear end of the tongue, and then squeeze the plunger forward to release the medicine gradually. Hold your pet’s muzzle for a couple seconds to ensure that she swallows all the medicine and that is it. You are good to go.

When Not to Use Pepto Bismol for Dogs

You should not give Pepto Bismol to your dog if she is or has: