A dog growling behavior should not be punished. Growling in dogs is an important form of communication and is normally a warning that if things don’t change the dog may go ahead and bite. Punishing growling sounds may eliminate the warning part and thus cause dogs to bite without warnings. To understand the behavior, we explore various causes of a dog growling at the owner, family members, and babies. Also discussed are causes for their growling at their own foot, while eating, at night in their sleep as well as how to stop it.

While the sound of a dog growling may be annoying, it is an important form of expression for the canine. While some dog owners take this to be a sign of aggression and punish dogs for it, it is not always the case. A dog’s growl may be an indication that the dog is uncomfortable. Such growls are experienced when trimming the nails or when a baby is trying to pet it. Figuring out the cause of the behavior is important as it will ensure the best course of action is taken. There are many reasons why your dog may be growling as discussed below. 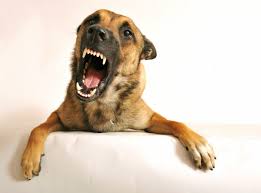 In some cases, a dog will growl out of fear. Fearful dogs produce a growling sound to warn people to get off them or face the consequences. This will mostly happen during encounters with strangers.

Dogs will growl to indicate their possession. For example, it may growl when someone picks their toy, food or when their things are handled carelessly. Some things they may want to show their passion for include toys, food bowls as well as tail bones.

Dogs are highly territorial and will be protective of their boundaries. They will feel threatened when strangers invade their space. A dog may growl at another dog who walks through their area to keep them off their boundaries. The mailman may also receive similar treatment from the dog. In such cases, they want to stamp their authority as well as let the owner know that there is an intruder within the home.

Dog growls should not be ignored as they could be a sign of pain whenever a dog gets hurt or gets an injury or is unwell. This is more so when the growling seems to be instantaneous. Dogs with conditions such as arthritis as well as tooth abscesses may growl in pain. Check him up to see if you can establish the cause of pain and evaluate if it would be necessary to visit a vet.

To avoid getting Disciplined

Where a dog is normally punished for unbecoming behavior such as urinating in the house as well as chewing on furniture, it may resort to growling to avoid punishment. For example, if he is always hit for misbehaving, he might initially submit. With time though, dog growling at the owner may be experienced out of fear of pain for being hit.

Another reason why a dog may growl is when excited. This usually happens when the dog is playing. In such situations, the best way to contain it would be by slowing down the speed of the game.

When dogs are subjected to things they are uncomfortable doing, they may end up expressing their displeasure. This may be exhibited through growls. For example, a dog that is not comfortable having their nails clipped may growl while at it. This they do in order to have their way and to avoid engaging in things they are reluctant about.

Although a rare condition which is frequent in specific breeds such as the springer spaniels, the rage syndrome could be the reason for a dog growling. Rage episodes tend to kick off as growling and with time the dog may become aggressive. It causes sudden rage in your pet that is usually exhibited in episodes.

Where none is, the dog could be expressing territoriality and may be asserting his authority. At this point, behavior reinforcement is necessary so the dog can learn to respect the authority of the owner as well as others surrounding it.

Another category of the family that may be subjected to growling from dogs is the little ones in the house. When a dog growls at a baby, it could be as because of discomfort. At times, children will pet the canine a little bit too roughly making them uncomfortable. The sound may be so as to show displeasure.

Children may at times not understand boundaries. A dog may growl at them if they try to invade their territory like when they get into their bed. The same may also happen when the child tries to play with the dog’s toys. In such situations, the dog will simply be communicating with the child to keep their distance.

To ensure that the baby is safe, watch out for normal growling and try to make the dog comfortable around the baby. This will help prevent the situation from escalating to aggression.

Dog Growling at Nothing and for No Reason

At times, dog owners have complained of their dog growling at nothing or for no reason. In most cases though, there is always a reason for the growl. It could be that the reason is not apparent to the owner. That is unless the dog is asleep and dreaming.

When you can’t point out the cause of the growl, it could be your dog is trying to express himself. For example, a dog who is on a leash or behind a fence could be expressing his barrier frustration. To curb this, you should teach your dog how to relax when under such circumstances.

Failure to do so may lead to extreme protective or territorial behavior which on the long end leads to aggression. Also, avoid chaining your dog while outdoors to prevent the behavior from escalating into aggression.

Dog Growling in Sleep, in Bed and at Night

According to vetstreet.com, dog growling in their sleep and in bed accompanied by muffled barks and yips is normal canine behavior. When this happens, the dog will most likely be dreaming. Unless the night growls are not happening while the dog is asleep, this should not be of much concern. Where they happen when they are awake, any of the reasons discussed above could be the cause.

Dog Growling At Other Dog during Play

Quite often, dogs will growl while playing with other canines. The type of growling sound produced during such times is normally short in length and high pitched. This should be no cause for alarm as long as the dog portrays proper play signals.

To keep arousal levels low, ensure you conduct frequent breaks during play. This kind of growling could also be observed during play with the owner. Learn the distinction between what is acceptable and aggression and if necessary seek professional help.

Dogs, especially young puppies, are playful in nature. When bored, a young puppy may take his foot as a plaything just as they do with their tails and start to play with it. Other instances this may happen is when feeding where they may mistake their feet as something that wants to take food away from them.

In some cases though, the growling may be as a result of pain and discomfort on the foot. This could be caused by an injury or cysts in the paw. They could also be harboring thorns or specs in their paw pads making them uncomfortable. Inspect the foot checking closely between the toes to ensure that the growl is not being caused by discomfort.

How to Stop Dog Growling

When a dog growls, it is communicating. In most cases, this will be a warning that things could get ugly. He may be telling other dogs to back off, communicating pain or discomfort as well as telling off anyone invading his territory.

Where his intentions are well interpreted, it helps to prevent a confrontation from ensuing. If not, the growling may escalate into aggression. This though should not be allowed. To help deal with it here is how to stop dog growling: