Chocolate poisoning in dogs is most common during holidays such as over Christmas, Valentines Day, Easter and Mothers Day. This is due to the increased consumption of chocolate and products made of chocolate within the homes. Why does chocolate kill dogs and not humans?  We explore the reasons, symptoms, myth busters, treatment, and tips on dealing with the situation

Why does Chocolate Kill Dogs

Why does chocolate kill dogs? While humans revel in the great taste of chocolate, if taken in huge amounts it may cause death in your dog. Chocolate contains theobromine; a chemical similar to caffeine which is easily metabolized by humans but which can increasingly develop to toxic matter in dogs. This is because it gets processed slowly giving it room to build up to toxic amounts within the system.

Different chocolate types have different levels of the toxic theobromine substance. While it would only take two ounces of baker’s chocolate to kill a 20-pound dog, it would take up to 20 ounces of milk chocolate to have the same effect.

Dark chocolate, cooking chocolate, and cocoa have the highest amounts of theobromine. Larger dogs can consume more chocolate when compared to smaller breeds before it can have negative effects.

Chocolate has in it methylxanthines. These are substances such as theobromine and caffeine. Dogs are more sensitive to these substances than dogs and when consumed in enough amounts, theobromine affects the cardiovascular system, nervous system as well as urination. Generally, the bitter and darker a chocolate is the higher the danger it poses to your pet.

Now that we have the answer to the question “why does chocolate kill dogs?” how much chocolate can a dog eat to make it sick without dying and what amount can it withstand before dying?

As indicated above, there are specific amounts dependent on the chocolate type that may lead to toxicity in your dog or cat. A small amount is not likely to have severe consequences but could cause stomach upsets. How then can you tell how much chocolate is bad for your dog?

There is no standard amount of chocolate that can be said to be toxic to your dog. How much chocolate is too much for your dog depends on a number of factors including their weight and the type of chocolate under scrutiny.

With consumption of milk chocolate, 0.7ounces consumed per pound of body weight will give mild signs while two ounces for every pound of dog weight will result in severe symptoms. 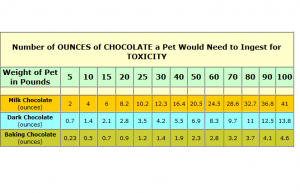 Anything below the indicated amounts may only get your dog sick with mild symptoms such as vomiting and diarrhea.

Symptoms of Chocolate Toxicity in Dogs

When a dog consumes chocolate and becomes intoxicated, it starts showing signs of intoxication starting four hours after consumption. These include:

Why Does Chocolate Kill Dogs if they eat it and not Humans?

While a small amount of chocolate may not have negative consequences, large amounts will. How, then, is it possible for humans to consume a lot of chocolate with no harm while animals cannot? Why does chocolate kill dogs and not humans?

The reason why chocolate is not toxic to humans is the fact that they have the capability to break down methylxanthines such as theobromine when they eat it. This makes the excretion more efficient than in dogs thus there is no buildup.

While some people believe that even small amounts of chocolate are deadly for dogs, this is simply a myth. This though is relative since a small amount for a large breed may be an amount enough to harm miniature breeds. The fact that small amounts may not harm your pup does not mean they should be allowed to eat it. Keep chocolate away from your dog.

It is possible that even after taking all the precautions necessary your dog still gets to munch some chocolate. Where this is the case, what do you do? Below is how to treat a dog that has eaten chocolate.

The first step you should take is to analyze and get more details on the situation. Find out:

With this, you will be in a position to make the right decisions knowing well that white chocolate is least toxic while baker’s chocolate is the most toxic. More details are available in the chart above. It also helps you offer your veterinarian accurate information for the best direction on what to do.

Calling the vet and giving him the above information will help come up with the best solution. The veterinarian will let you know whether to take the dog to them or if you should induce vomiting.

This is usually recommended where the chocolate consumption happened within the last two hours. If it’s been over two hours since your dog ate chocolate, do not induce vomiting. This is also not to be done in dogs exhibiting severe symptoms such as tremors. Follow the procedure below in treating a dog that has eaten chocolate.

Your veterinarian may advise you to give activated charcoal to your dog after you have administered hydrogen peroxide. This should be done with caution. Administration may see your dog suffer elevated levels of sodium in the blood. It could also result in constipation and black stool. Only do this if your vet recommends it.

Tips and Warnings to Help Chocolate Toxicity in Dogs